On Monday, according to reports, Burkina Faso confirms its first death case of coronavirus which is also the first known fatality in sub-Saharan Africa.

According to Professor Martial Ouedraogo Burkina’s national coordinator for responding to the virus “We recorded the death overnight of a female patient aged 62, who suffered from diabetes and was in intensive care,”

With the addition of seven new cases, “the number of patients (in Burkina Faso) stands at 27, comprising 15 women and 12 men”, Ouedraogo said.

The tally includes a case in the town of Bobo Dioulasso, the first outside the capital Ouagadougou.

Africa has lagged behind the global curve for coronavirus infections and deaths, although the reasons for this are unclear.

As of Wednesday, a tally of reported cases, compiled by AFP, stood at 576 for all of Africa.

Of these, 15 cases have been fatal: six in Egypt, five in Algeria, two in Morocco, one in Sudan and one in Burkina Faso.

Experts have sounded loud warnings about the vulnerability of sub-Saharan countries to the highly contagious respiratory virus.

A 2016 analysis by the Rand Corporation, a US thinktank, found that of the 25 countries in the world that were most vulnerable to infectious outbreaks, 22 were in Africa — the others were Afghanistan, Yemen and Haiti. 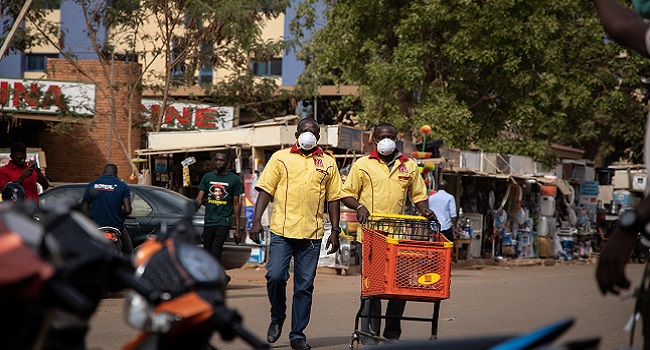 The report put the finger on a “disease hot spot belt” extending on a line of countries, running across the southern rim of the Sahara through the Sahel to the Horn of Africa, many of which are struggling with conflicts.

“Were a communicable disease to emerge within this chain of countries, it could easily spread across borders in all directions, abetted by high overall vulnerability and a string of weak national health systems along the way,” the report warned.

On Saturday, Burkina Faso ordered the closure of all schools and a ban on all public and private gatherings until the end of April.