Elton John, singer, and songwriter has tearfully apologized to fans after cutting short a concert in New Zealand due to illness

The 72-year-old, who is in the midst of a grueling world tour, struggled to sing while seated at a grand piano during a performance at Mount Smart Stadium on Sunday night. After being checked by a medic with a stethoscope, he battled on through two more songs before calling a halt to proceedings barely halfway through his setlist.

“I can’t sing, I’ve just completely lost my voice,” he told concert-goers in a croaky rasp. “I’ve got to go. I’m so sorry.”

Elton John’s illness comes as health authorities worldwide are on high alert for signs of the novel coronavirus, which has infected more than 70,000 and killed 1,770 in mainland China.

New Zealand has no reported cases of the virus.

Video footage showed Elton John, dressed in a powder-blue suit and wearing his trademark oversized glasses, standing at the piano and shrugging his shoulders at the crowd in a gesture of helplessness. He then shuffled off the stage with his head bowed, helped by members of his road crew as the crowd cheered their support.

“I was diagnosed with walking pneumonia earlier today, but I was determined to give you the best show humanly possible,” he later tweeted.

“I played and sang my heart out, until my voice could sing no more. I’m disappointed, deeply upset and sorry. I gave it all I had.”

Walking pneumonia is an informal term for atypical pneumonia, which causes mild infections of the respiratory system, according to the US Centers for Disease Control. 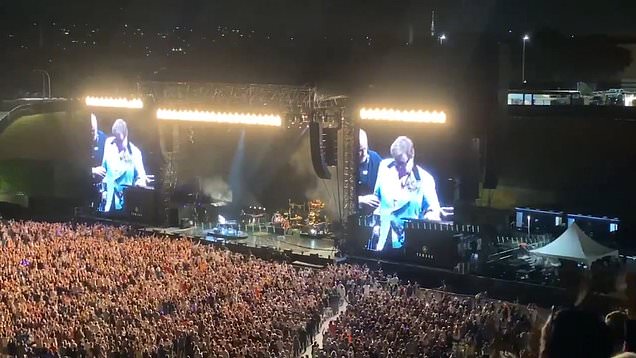 It said symptoms include tiredness, sore throat, fever and coughing, and the illness can sometimes lead to full pneumonia, a serious lung infection.

New Zealand Prime Minister Jacinda Ardern said she briefly met the singer before Sunday’s concert and “you could tell he wasn’t feeling well”.

“Given he had what they call walking pneumonia, the fact that he spent roughly two hours on stage giving such a huge performance was incredible and very generous,” she told reporters, praising his commitment to fans.

Elton John is in New Zealand as part of his “Farewell Yellow Brick Road” world tour, which began in 2018 and is scheduled to end in late 2020 in London.

Featuring hundreds of concerts across the globe, it is billed as the last chance to see the star before he retires.
The septuagenarian has followed a punishing schedule in New Zealand, not only performing concerts but also slotting in a side trip to sing at the Academy Awards in Los Angeles.

At the Oscars, he took home the award for best original song for “(I’m Gonna) Love Me Again” from the musical biopic about his life, “Rocketman”.

Elton John has two more shows scheduled in Auckland before heading to Australia for a further seven gigs.

The tour’s Australasian promoter, Chugg Entertainment, said one of the Auckland shows had been moved from Tuesday to Wednesday so the star could get additional rest following medical advice.

Sport as a catalyst for national renewal and economic development