A forty-two-year-old woman has been arrested by personnel of the Ghana Immigration Service (GIS) at Asikuma Junction in the Volta Region, for possessing quantities of dried leaves suspected to be marijuana.

The woman, Mavis Adubea, was arrested when she tried to outwit the GIS personnel by posing as a pregnant woman.

Briefing the media here on Monday, the Deputy Commissioner of Immigration (DCI) in-charge of the Volta Region, Mr Peter Claver Nantuo, said on Sunday, April 26, the woman tried to outwit the personnel, who were stationed at the checkpoint at Asikuma, but was arrested.

He explained that the suspect, who was traveling from Kpando to Accra, allegedly posed as a pregnant woman by fastening three slabs of the dried leaves on her belly.

Mr Nantuo said, however, luck eluded Mavis, who was dressed in ‘maternity’ gown, when the officers on duty became suspicious of her strange body language. 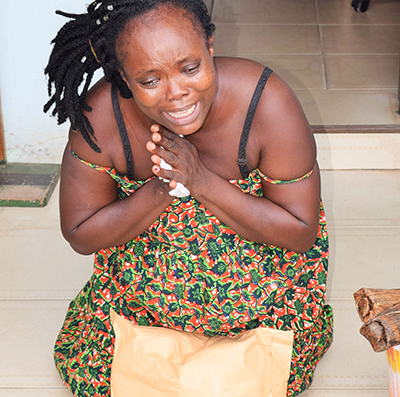 “Subsequently, the GIS personnel isolated her for profiling and thorough interrogation, she admitted that she was not pregnant but rather carrying the stuff on her belly,” he added.

Mr Nantuo said upon interrogation, the suspect explained that the slabs were given to her by her aunt in Kpando, and instructed her to tie them onto her belly before transporting them to Takoradi.

“She was oblivious to the content of the slabs, but said that her aunt told her to sell them and use the proceeds as her business capital,” he added.

Subsequently, the Takoradi-based woman was arrested and taken to Ho where she was handed over to the police.

The suspect broke down in tears when she was handed over to the police and also pleaded with the media not to report the matter.

Mr Nantuo commended the GIS personnel for their vigilance, saying that the duties of immigration officers went far beyond the inspection of passports at entry points at the frontiers to fighting all forms of crime.

He also re-affirmed the GIS firm stance to continue to collaborate with the other security agencies to fight crime in the region.

Touching on cross-border crime, he warned: “Do not attempt it, because we will definitely get you.”

Family Planning to remain opened through lockdown in Namibia