Share
From the earliest days of her childhood, Kamala Harris was taught that the road to racial justice was long.

She spoke often on the campaign trail of those who had come before her, of her parents, immigrants drawn to the civil rights struggle in the United States — and of the ancestors who had paved the way.

As she took the stage in Texas shortly before the election, Ms. Harris spoke of being singular in her role but not solitary.

“Yes, sister, sometimes we may be the only one that looks like us walking in that room,” she told a largely Black audience in Fort Worth. “But the thing we all know is we never walk in those rooms alone — we are all in that room together.”

With her ascension to the vice presidency, Ms. Harris will become the first woman and first woman of color to hold that office, a milestone for a nation in upheaval, grappling with a damaging history of racial injustice exposed, yet again, in a divisive election. Ms. Harris, 56, embodies the future of a country that is growing more racially diverse, even if the person voters picked for the top of the ticket is a 77-year-old white man.

That she has risen higher in the country’s leadership than any woman ever has underscores the extraordinary arc of her political career. A former San Francisco district attorney, she was elected as the first Black woman to serve as California’s attorney general. When she was elected a United States senator in 2016, she became only the second Black woman in the chamber’s history.

Almost immediately, she made a name for herself in Washington with her withering prosecutorial style in Senate hearings, grilling her adversaries in high-stakes moments that at times went viral.

Yet what also distinguished her was her personal biography: The daughter of a Jamaican father and Indian mother, she was steeped in racial justice issues from her early years in Oakland and Berkeley, Calif., and wrote in her memoir of memories of the chants, shouts and “sea of legs moving about” at protests. She recalled hearing Shirley Chisholm, the first Black woman to mount a national campaign for president, speak in 1971 at a Black cultural center in Berkeley that she frequented as a young girl. “Talk about strength!” she wrote.

After several years in Montreal, Ms. Harris attended Howard University, a historically Black college and one of the country’s most prestigious, then pursued work as a prosecutor on domestic violence and child exploitation cases. She speaks easily and often of her mother, a breast cancer researcher who died in 2009; of her white and Jewish husband, Douglas Emhoff, who will make history in his own right as the first second gentleman; and of her stepchildren, who call her Momala.

It was a story she tried to tell on the campaign trail during the Democratic primary with mixed success. Kicking off her candidacy with homages to Ms. Chisholm, Ms. Harris attracted a crowd in Oakland that her advisers estimated at more than 20,000, a tremendous show of strength that immediately established her as a front-runner in the race. But vying for the nomination against the most diverse field of candidates in history, she failed to capture a surge of support and dropped out weeks before any votes were cast.

Part of her challenge, especially with the party’s progressive wing she sought to win over, was the difficulty she had reconciling her past positions as California’s attorney general with the current mores of her party. She struggled to define her policy agenda, waffling on health care and even her own assault on Joseph R. Biden Jr.’s record on race, perhaps the toughest attack he faced throughout the primary campaign.

“Policy has to be relevant,” Ms. Harris said in an interview with The New York Times in July 2019. “That’s my guiding principle: Is it relevant? Not, ‘Is it a beautiful sonnet?’”

But it is also this lack of ideological rigidity that makes her well suited for the vice presidency, a role that demands a tempering of personal views in deference to the man at the top. As the vice-presidential nominee, Ms. Harris has endeavored to make plain that she supports Mr. Biden’s positions — even if some differ from those she backed during the primary.

While she struggled to attract the very women and Black voters she had hoped would connect with her personal story during her primary bid, she continued to make a concerted effort as Mr. Biden’s running mate to reach out to people of color, some of whom have said they feel represented in national politics for the first time.

Many witnessed — and recoiled at — the persistent racist and sexist attacks from conservatives. President Trump has refused to pronounce her name correctly and after the vice-presidential debate, he derided her as a “monster.”

For some of her supporters, the vitriol Ms. Harris had to withstand was another aspect of her experience they found relatable.

“I know what I was thrown into as the only African-American at the table,” said Clara Faulkner, the mayor pro tem of Forest Hill, Texas, as she waited for Ms. Harris to address a socially distanced crowd in Fort Worth. “It’s just seeing God move in a mighty way.”

While some members of the political establishment professed outrage at the insults, friends of Ms. Harris knew that her pragmatism extended to her understanding of how the political world treats women of color.

Senator Cory Booker, a colleague and friend of Ms. Harris’s who has known her for decades, said in an interview that some of her guardedness was a form of self-protection in a world that has not always embraced a barrier-breaking Black woman.

“She still has this grace about her where it’s almost as if these things don’t affect her spirit,” Mr. Booker said. “She’s endured this for her entire career and she does not give people license to have entrance into her heart.”

After waiting days for results, Democrats rejoiced in a victory that offered a bright spot in an election that delivered losses to many of their candidates, including several high-profile women.

Representative Barbara Lee, Democrat of California, who got involved in politics through Ms. Chisholm’s presidential campaign, said she always believed she would see the first Black woman at the steps of the White House.

“Here you have now this remarkable, brilliant, prepared African-American woman, South Asian woman, ready to fulfill the dreams and aspirations of Shirley Chisholm and myself and so many women of color,” she said. “This is exciting and is finally a breakthrough that so many of us have been waiting for. And it didn’t come easy.”

The Democrats’ down-ballot defeats tempered the celebratory mood a bit, as did a wistful sense among some activists and leaders that this historic first still leaves women in second place — closer than ever to the Oval Office, sure, but not in it. 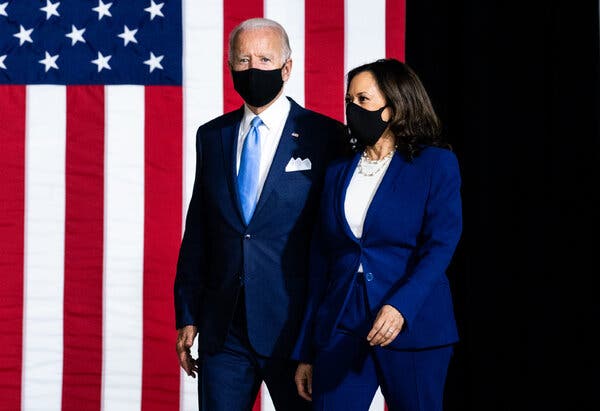 The end to a presidency that inspired waves of opposition from women, many politically engaged for the first time, has left the “highest, hardest glass ceiling” intact. Democratic primary voters, including a significant number of women, had rallied behind Mr. Biden, eschewing the women and people of color in the race because they believed Mr. Biden would be most capable of beating Mr. Trump. Scarred by Hillary Clinton’s defeat four years ago, many believed the country was not quite ready to elect a female commander in chief.

Ms. Harris’s presence on the ticket will forever be linked to Mr. Biden’s explicit promise to select a female running mate in an acknowledgment that the party’s future probably does not look like him.

Ms. Harris now finds herself the most clearly positioned heir to the White House. Perhaps more than any other vice president in recent memory, she will be carefully scrutinized for her ambitions, a level of attention that is perhaps inevitable for the No. 2 of the oldest incoming No. 1 in history.

Mr. Biden understands this, Mr. Booker said: “He is really bringing us to the next election.”

Allies say Ms. Harris is acutely aware of her place in history. She views her work as connected to both the civil rights leaders who came before her — the “ancestors,” as she calls them — and the generations she hopes to empower.

Representative Pramila Jayapal, Democrat of Washington, a rising figure in the party’s left wing, said Ms. Harris’s ascent was a deep source of pride among South Asians, expanding the imaginations of how high they can climb in American public life. Ms. Jayapal has spoken proudly of her own connection to the new vice president, writing an op-ed article in The Los Angeles Times in August describing their intertwined family history in South India.

“She understands what it means to be the child of immigrants — what it means to be a person of color seeking racial justice,” she said, pointing to Ms. Harris’s work on rights for domestic workers and helping Muslim immigrants get access to legal counsel. “There’s just so much you don’t have to explain to a Vice President Harris and I believe she will fight for many of the issues that are important to our South Asian community.”

The small sorority of Black women in federal politics also views Ms. Harris as a mentor and an ally, praising her championing of issues like Black maternal mortality and anti-lynching legislation that have not typically received the spotlight that can follow a high-wattage political brand.

When Representative Lauren Underwood was mounting her first race for Congress, trying to become the first Black women to win her predominantly white suburban Chicago district, Ms. Harris reached out for coffee.

“There’s not that many Black women who have been at the highest level of politics in this country. Not that many Black women who have run very competitive races,” said Ms. Underwood, who became the youngest Black woman ever elected to Congress in 2018. “To have the opportunity to learn from, counsel from and just know someone who has done that is something I find incredibly valuable.”

Kimberlé Crenshaw, a prominent Black progressive scholar, hailed Ms. Harris’s ascension to the vice presidency and described her as “well positioned to weather the storms that will definitely come now that she has broken through the glass ceiling.”

But amid the joy and sense of empowerment in seeing a woman of color as the nation’s second-highest elected official, she also cautioned that the history-making moment should not distract progressives from continuing to push their agenda.

“This is still the Biden administration — what Kamala Harris thinks or does has to be recognized as being part of that administration,” she said. “So we cannot let the pedal to the metal be slowed in any way because we’re celebrating the fact that we’ve had this breakthrough moment.”

For others, that moment has been a very long time coming.

Opal Lee, 94, paid a poll tax when she first went to vote, choosing between casting her ballot for the Democratic candidate or buying food for her four young children. Decades later, Ms. Lee, a former teacher and activist from Fort Worth, Texas, celebrated at President Barack Obama’s inauguration.

Despite the health risks from the coronavirus pandemic, Ms. Lee has no intention of missing Mr. Biden’s inauguration in Washington this January — to witness Ms. Harris.

“I want to be able to tell my great-great-grandchildren how it felt for a woman to be vice president,” she said. “I just got to go.”

Joe Biden Elected President of the US