More than 100 House Republicans filed an amicus brief in support of a Texas lawsuit seeking to challenge President-elect Joe Biden’s election wins in Georgia, Michigan, Pennsylvania and Wisconsin.
A group of 106 House Republicans placed their support behind a Texas lawsuit seeking to challenge President-elect Joe Biden‘s election wins in several key states Thursday.The congressional lawmakers signed an amicus brief supporting the lawsuit by Texas Attorney General Ken Paxton seeking to block Georgia, Michigan, Pennsylvania and Wisconsin from voting in the Electoral College.”The brief presents [our] concern as Members of Congress, shared by untold millions of their constituents, that the unconstitutional irregularities involved in the 2020 presidential election cast doubt upon its outcome and the integrity of the American system of elections,” the lawmakers wrote.Rep. Mike Jonson of Louisiana, the outgoing Republican study committee chairman, led the effort and other prominent members of the GOP, including Republican Whip Steve Scalise of Louisiana, top Republican on the House judiciary committee Rep. Jim Jordan of Ohio, chairman of the conservative Freedom Caucus Rep. Andy Brigs of Arizona and Rep. Jim Banks of Indiana. 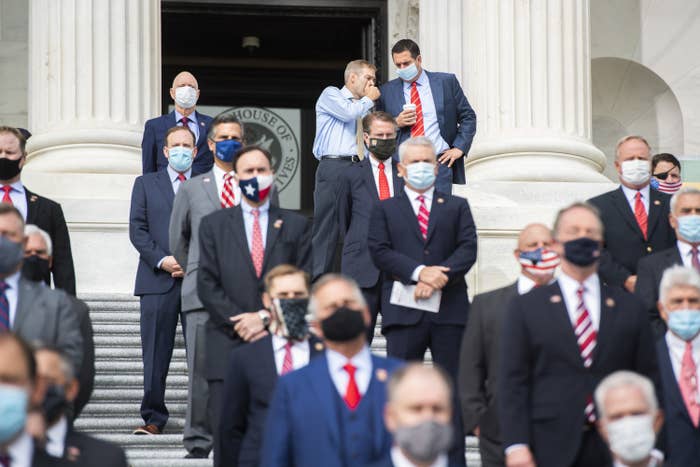 President Donald Trump on Wednesday joined the lawsuit, which argues changes to election procedures in the four states were unlawful and called into question Biden’s victories in those states.

On Thursday, Pennsylvania Attorney General Josh Shapiro filed a brief in the U.S. Supreme Court opposing the Texas lawsuit.”Its request for this Court to exercise its original jurisdiction and then anoint Texas’s preferred candidate for president is an affront to principles of constitutional democracy,” Shapiro, a Democrat, wrote in a tweet announcing the brief.Ohio Attorney General Dave Yost, a Republican, also filed a brief stating the Supreme Court lacks the authority to order the state legislatures to appoint presidential electors.”The relief that Texas seeks would undermine a foundational premise of our federalist system: the idea that the states are sovereigns, free to govern themselves,” Yost’s brief states. “The courts have no more business ordering the People’s representatives how to choose electors than they do ordering the People themselves how to choose their dinners.”