Violence and rape have long been part of everyday life for many women in Sierra Leone. One rural village has begun educating men on the dangers of raping their wives to become better husbands.

About 50 men recently signed up to a program teaching them how to stop abusing their wives — a subject that’s taboo in rural parts of Sierra Leone.

Joseph Pidia, who facilitates the voluntary workshop, hopes to change the mindsets of men so they can break the chain of domestic violence and rape that plagues the West African nation.

Pidia has run the workshops for four years. His training on how to become a good husband takes about six months, with three monthly sessions. Wives are not allowed to participate. However, despite the seriousness of the topic, humor is permitted.

If you want to say something, you must raise your hand. That’s rule number one of the husband school. Like in any class, according to Pidia, discipline is vital to achieving the desired goals — and his motivation is very personal.

“In my village, a woman was raped. Instead of people supporting her, they all blamed her that it was her fault,” Pidia told DW. “She had to move to another community, which was bad. I felt bad.”

During the first session, and to approach this somewhat sensitive topic, Joseph Pidia uses role-playing techniques. The idea: Men put themselves in their wives’ shoes for a change of perspective. Some men believe that they don’t need to ask their wives for permission to have sex. 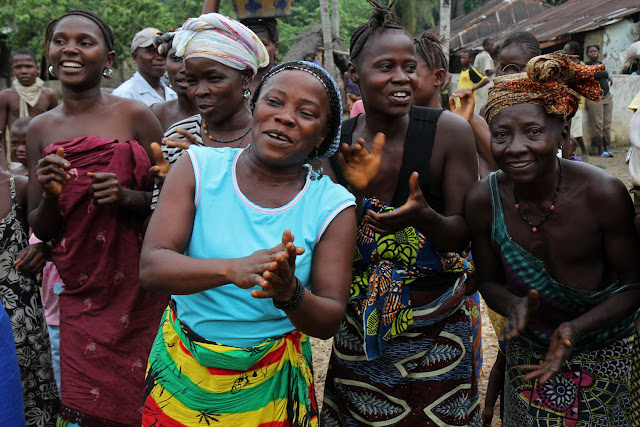 The workshop helps them understand the point at which they cross borders in their relationships.

“It will help stop all the mistakes that used to happen in my house,” village chief Mohamed Lamin, a program participant, told DW, “This workshop will benefit me to stop all past mistakes and bring development in my family.”

Mohamed Josiah, another workshop attendee, said the workshop helps change their perspectives on how to better live with their wives.

All violations towards our wives need to be fewer now, and we need to live in peace with them, he told DW.

Around 200,000 women were victims of gender-based violence during Sierra Leone’s 1991-2002 civil war. But the problem persists, and many of the assaults are committed by relatives.

In 2019, President Mada Bio declared rape a national emergency, after a young girl was raped and became paralyzed.

Joseph Pidia believes that men’s behavior is a direct consequence of his country’s dark past.

“Most of it [violence against women] started during the civil war. So, the goal is to change their mindset. When the mind is okay, everything will be okay.

Karimu Lahai, a graduate of the husband school, said that life has changed and is living happily with his wife.

“I always quarreled with my wife, beat her, and sent her back to her parents. I also deprived my children of food, and it hurt them at the time,” Lahai told DW.

“But ever since I joined the husband school training, we are living peacefully, and there is nothing I will do to make her unhappy again. We are a happy family.”

Lahai’s wife, Amie Karimu, was full of praise for the husbands school.

“The school has made a lot of changes in our lives. If the husband school hadn’t come here, my husband would have remained violent against our children and me,” Karimu said.

Sallay Kanneh, another wife whose husband attended the school, said he is more cooperative now than ever before.

“When I entered into a relationship with my husband, it was very challenging for me because we fought day and night,” she said.

“He neglected all his responsibilities as a man and, most of the time, failed to provide for us. My husband has been very cooperative since the introduction of the husband school.”

Joseph Pidia especially chooses hard-to-reach locations in Sierra Leone. He says what people living in the rural locations need most is access to information. Unlike cities, there are no radio stations, newspapers, or access to television.

Information finds its way through word of mouth in the community. Pidia hopes that through the workshops, he can get his message gets across:

Currently, there are more than 40 husband schools in Sierra Leone. Pidia’s school survives on donations, but he is convinced that, if one workshop can change the mindset of one single man, it might be able to change the future of an entire generation.

Every evening, DW sends out a selection of the day’s news and features. Sign up here.