Living on the mountainous front lines of Yemen’s brutal conflict, 28-year-old Aisha Hussain Sibtan was unable to access antenatal care during her second pregnancy. Reaching the city would take two to three hours on foot, and the threat of violence always loomed close.

But she had another reason for staying away from antenatal care, as well: “We also kept hearing on the television about a new virus called corona that is killing people in many countries,” she told UNFPA. “I was even scared to go to the hospital fearing this may affect my unborn child.”

M. Sibtan decided to have her baby at home, in the remote Al Lawya’a Village in Al Hudaydah Governorate. It is a common enough decision in Yemen. About 70 per cent of deliveries took place at home according to a 2013 survey; after years of conflict, the number is likely higher now.

But her pregnancy was not like most others: Ms. Sibtan was unknowingly pregnant with triplets.

“I was in severe pain during the last month of my pregnancy,” she recalled. “The pain was not normal, when I compare it with my previous pregnancy.”

Eventually, she changed her mind and asked to see a doctor. “My husband went in search of a car to take me to the closest hospital, but he could not find a car that would drive in these rough terrains.

Not long after, she went into labour. 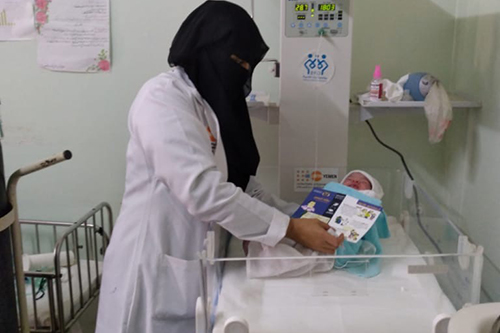 “With unbearable pain, I managed to deliver at home with the help of my mother. I was shocked to give birth to two sons, and my pain didn’t stop. My mother kept shouting that there are two umbilical cords hanging and I was losing blood. I can hardly remember anything after that,” Ms. Sibtan recounted.

Her family contacted an uncle, who had access to a car. The uncle rushed Ms. Sibtan to the Al Lawya’a Health Centre, a two hour drive away.

The hospital’s maternity ward – which receives support from UNFPA and the Building Foundation for Development, with funding from European Civil Protection and Humanitarian Aid Operations – is equipped to provide emergency obstetric care.

“They quickly diagnosed that I was carrying another baby. My third son was safely delivered by a Caesarean section.”

“It was like a miracle. I had just given birth to triplets.” All three boys, and their mother, were discharged in good health. The unexpected arrival of triplets would be stressful under even normal circumstances. And Ms. Sibtan’s circumstances are anything but normal.

“My family is delighted of the birth of our triplets,” she hastened to clarify, “but I can’t help but worry about raising them in such an uncertain time, with war and this virus.”

Yemen has so far been spared from the COVID-19 pandemic, according to official statistics. There are no known cases of the virus in the country. Yet health experts, and the general public, are fearful that the disease could soon strike.

An outbreak would be disastrous for the country and its health system. Eighty percent of the country relies on humanitarian assistance for survival. Nearly a quarter of the entire population is malnourished, including an estimated one million pregnant and breastfeeding women.

The most basic preventative measure – hand washing – is not an option for many Yemenis. More than 17 million people need support to meet their basic water, sanitation and hygiene needs. Soaring prices and reduced purchasing power are also putting clean water and personal hygiene items out of reach for the most vulnerable.

On top of that, the health system is on the verge of collapse. Nearly half of health facilities are non-functioning or partially functioning. Only 20 per cent functioning health facilities provide maternal and child health services. Equipment and medical supplies are inadequate or obsolete, and health workers have gone without pay or received irregular pay for more than two years.

“I don’t know when the coronavirus will come to Yemen, or how we would be able to protect our children, or have enough money to do so,” Ms. Sibtan said.

UNFPA is working closely with the Ministry of Health and the World Health Organization to prepare for the potential arrival of COVID-19.

UNFPA has provided 40 ventilators for emergency obstetric care; these are now being made available for the response to the pandemic, and another 40 ventilators are being shipped to the country. Assorted infection control and personal protective equipment for approximately 1,500 health personnel has been pre-positioned in the country. This week, these supplies were distributed to 22 health facilities in southern parts of Yemen. Additional supplies are being procured for health workers in the northern parts of the country.

UNFPA is also working to support maternal and reproductive health services, which are already in short supply. One critical measure has been reinforcing infection prevention and control measures in 235 UNFPA-supported maternal and emergency obstetric care facilities country-wide.

Assistance is also required for people who are being quarantined after entering the country. As of 5 April, UNFPA, together with UNICEF and the World Food Programme, had provided food, hygiene kits and dignity kits to more than 5,200 people under quarantine.

UNFPA has appealed for $100.5 million  to meet the reproductive health and protection needs of women and girls in Yemen this year; so far, only $40.3 million has been mobilized. UNFPA is additionally appealing for funding to respond to the global pandemic in fragile and humanitarian settings.

Access to abortion service a critical issue for women amid lockdown